Before playing Marin Cilic in the third round of the US Open, Dominic Thiem said he didn’t want to face the Croatian that early...
Tovább

In his first match as a Grand Slam champion, Dominic Thiem began his title bid at Roland Garros with a 6-4, 6-3, 6-3 victory against Marin Cilic on Monday.

The reigning US Open champion earned six service breaks to overcome the former World No. 3 in two hours and six minutes on the new Court Philippe-Chatrier. This is Thiem’s second victory against Cilic in as many events, following his four-set win against the Croat in New York earlier this month.

Thiem was competing for the first time since defeating Alexander Zverev in a final-set tie-break to capture his maiden Grand Slam title at the US Open. His victory ended a six-year wait for a first-time major singles champion. The last player to achieve the feat prior to Thiem was Cilic, who clinched the US Open trophy in 2014.

“I really love this tournament. It is, by far, my best Grand Slam tournament so far,” said Thiem, in an on-court interview. “I wanted to prepare well. I didn’t want to lose too much tension after my victory in New York and I am really happy how I did it.

“I am really happy with my first round. I was facing another great champion today. The transition to the clay and the cold conditions worked out pretty well.”

Following his fourth win in as many ATP Head2Head clashes against Cilic, Thiem improves to 25-6 at Roland Garros. The 27-year-old is aiming to go one better than his past two campaigns in the French capital, where he has finished as runner-up to 12-time champion Rafael Nadal.

“I love the conditions because I am from Austria,” said Thiem. “I know how it is to play in these cold conditions and back in juniors and when I started to play Futures, it was always like that, 10 to 15 degrees [and] cold. I love it when it is not too fast, so I can be a little bit behind the baseline and make a lot of returns in court. I feel well and I felt well from the first moment I came here again this year. I am looking forward to an exciting second round.” 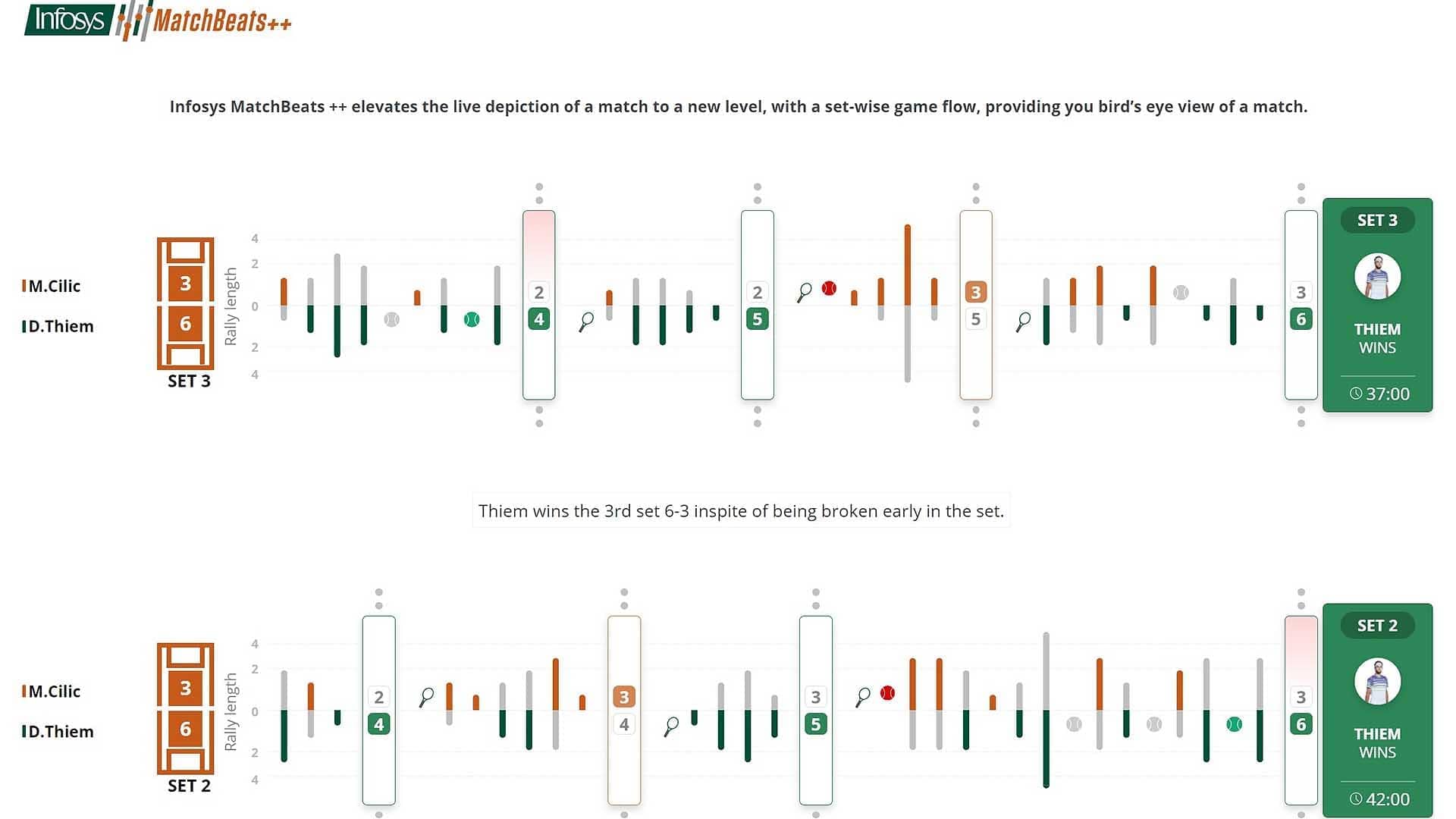 Thiem will next face former World No. 8 Jack Sock for a place in the third round. The American qualifier broke Reilly Opelka on five occasions to record a 6-4, 6-4, 6-3 victory on Court 12.

Thiem owns a 3-1 ATP Head2Head record against Sock and the pair will be contesting their third straight meeting in Paris. In their most recent match at the 2018 Rolex Paris Masters, Thiem recovered from a set down to avenge a straight-sets loss to the American at the same event in 2016.

Watched by only a handful of spectators, Thiem and Cilic exchanged early service breaks to open the match. It wasn’t until the ninth game that Cilic buckled, hitting a forehand approach long after good defence from Thiem and then mis-timing a backhand wide to be broken. Thiem recovered from 0/40 in the next game to clinch the 47-minute opener, which saw Cilic commit 17 unforced errors.

From 3-4 in the first set, Thiem won five straight games to put Cilic, the two-time former quarterfinalist (2017-‘18), firmly on the backfoot in the second set. The US Open champion clinched a two-set lead with his fourth break of the match, ending an almost nine-minute game with a powerful backhand down the line.

After falling behind 0-2 in the third set, Thiem forced errors from Cilic at the net with dipping passing shots to turn the set in his favour. The World No. 3 converted his first match point to reach the second round, as Cilic struck a crosscourt backhand return into the net.