Ten Challenger Stars To Watch At The US Open 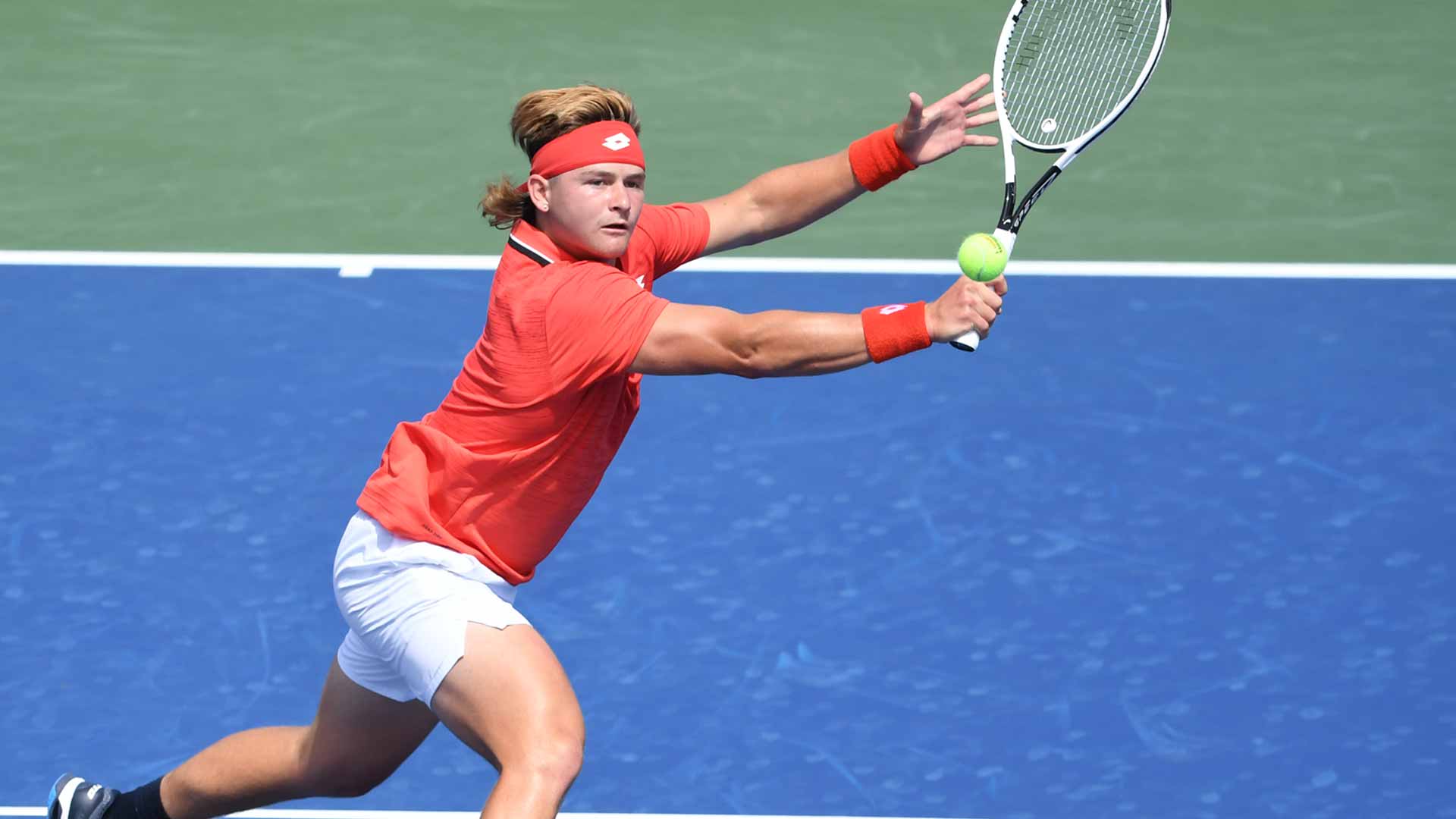 For the next fortnight, all eyes will be on the stars of the ATP Tour as they battle for glory at the US Open. But as hungry as they will be to lift the champions’ trophy, there is a group of competitors that are just as motivated to make a splash at the hard-court Grand Slam. They are the players competing throughout the year on the ATP Challenger Tour.

Securing entry into a Grand Slam is no simple task. It requires year-round focus, hard work and consistency to arrive at this moment. For players grinding on the Challenger circuit, this is the reward. Having the opportunity to test their talents against the best players in the world, and with coveted points and prize money at stake, is what drives these players from January to November.

The 2020 US Open is no exception. A platform to showcase their skills and eventually take the next step on the ATP Tour, it presents a huge opportunity on a global stage. A strong performance at the US Open can prove to be career-altering for many Challenger stars, as they target the Top 100 and beyond. So, which players are poised to wreak havoc on the draw? We look at 10 to watch in New York…

THE AMERICANS
Ulises Blanch
One of 10 players making their Grand Slam debuts at the US Open, Blanch is ready for this stage. Born in Puerto Rico to Spanish parents, Blanch and his three siblings were embedded in many cultures at a very young age. His father Ernesto worked for Coca-Cola, a job that saw the family live in China, India and for eight years in Thailand, where Ulises first picked up a racquet. At the age of 13, they moved to Argentina and he would develop his game on the clay courts of the South American country. The 22-year-old opened the 2020 season outside the Top 400, but promptly shaved his ranking in half, posting a 14-5 record on the ATP Challenger Tour with a title in Ann Arbor. Also a semi-finalist in Monterrey, he earned his first Top 100 hard-court win there over Pablo Andujar. Blanch’s momentum was only halted by the COVID-19 suspension, but he is poised to pick up where he left off. On Monday, he kicks off his Grand Slam career against 13th-seed Cristian Garin.

Maxime Cressy
Three players at the US Open are Top 10 in Challenger wins in 2020. Blanch is one, J.J. Wolf is the other and Cressy is the third. The 23-year-old, a former college standout at UCLA, entered the COVID-19 hiatus on the heels of a dominant 14-6 record. February proved to be a turning point for the American, who reached back-to-back finals on Canadian soil, including a title in Drummondville and runner-up finish in Calgary. He will be hoping to ride his big serve to success in the Big Apple. The charismatic Cressy opens against Jozef Kovalik on Monday.

Marcos Giron
Monday will be a special day for Giron. Not only is the California native set to make his third appearance at the US Open, but he will do so as a member of the Top 100. Giron is projected to rise to a career-high No. 93 in the FedEx ATP Rankings, cracking the century mark for the first time. It’s well worth the wait for the 27-year-old, who is finally turning the corner after multiple hip surgeries. He lifted his first two Challenger trophies in 2019, in Orlando and Houston. Giron opens against Marc Polmans on Monday.

Brandon Nakashima
The second-youngest player in the draw is the 19-year-old from San Diego. Nakashima is one of the most-hyped teenagers on tour – and for good reason. In just 12 appearances on the ATP Challenger Tour, the American owns a staggering 25-12 record with a trio of semi-final finishes.  Armed with a steely resolve, relentless drive and attacking mentality, Nakashima was unfazed when he pushed Frances Tiafoe to the brink of defeat in Dallas in February. And one week later, he reached the quarter-finals in his ATP Tour debut in Delray Beach. Nakashima opens against Paolo Lorenzi on Monday.

J.J. Wolf
Beware the Wolf in NYC. When the 21-year-old makes his Grand Slam debut on Tuesday against Guido Pella, it will be a significant moment for the entire Wolf clan. The former Ohio State University standout comes from one of the most athletic families in the state’s history. Most notably, his grandfather Charley played professional baseball for the Cincinnati Reds and coached in the National Basketball Association. Now, J.J. is carrying the mantle on the tennis court. Already a four-time Challenger champion, he has taken home two of those trophies in 2020 and owns a ruthless 14-2 record. Up to a career-high No. 143 in the FedEx ATP Rankings, the Cincinnati native is hoping his mammoth game translates to the hard courts of the US Open.

Others To Watch: Last week, Sebastian Korda qualified at the Western & Southern Open – his first ATP Masters 1000 main draw – after securing his first Top 100 wins over Attila Balazs and Gilles Simon. The 20-year-old is in scorching form and will open against 12th seed Denis Shapovalov on Monday. Also, Thai-Son Kwiatkowski and Mitchell Krueger are looking to pick up where they left off in March. Kwiatkowski lifted his first Challenger trophy in Newport Beach and Krueger reached the semis in three of his last five events.

THE INTERNATIONALS
Gianluca Mager (ITA)
The last time we saw Mager, he was celebrating the greatest achievement of his career. It was in February that the Italian streaked to his first ATP Tour final at the 500-level event in Rio de Janeiro. A qualifier, he dropped just one set in six matches to reach the championship, where he eventually fell to Cristian Garin. Up to No. 79 in the FedEx ATP Rankings, the 25-year-old has been plotting his ascent on the Challenger circuit for years. It all culminated in 2019, when Mager won all three of his titles and posted a 43-23 record. His appearance in New York will be a well-deserved – and long-awaited – Grand Slam debut. He opens against Serbia’s Miomir Kecmanovic.

Sumit Nagal (IND)
Nagal will never forget his US Open debut. Exactly one year ago, India’s No. 1 won three matches to qualify for the main draw and faced Roger Federer under the lights on opening night. It was a moment unlike any other for Nagal, who snatched the first set in front of a packed Arthur Ashe Stadium, before eventually falling in four. But the World No. 122 has been plotting his Top 100 charge ever since. He rode the momentum from that experience to reach back-to-back Challenger finals and lift the second trophy of his young career (in Buenos Aires). The 23-year-old will open against Bradley Klahn, with a potential second-round date with second seed Dominic Thiem looming large.

Christopher O’Connell (AUS)
For many years, O’Connell was battling outside the Top 200 of the FedEx ATP Rankings, grinding on the ITF circuit and ATP Challenger Tour. And in 2018, the 25-year-old Aussie took up a second job cleaning boats while recovering from a knee injury. But perseverance pays off and that is certainly applicable for the Sydneysider. From not having an ATP Ranking to open the 2019 season to sitting at a career-high No. 115 a year and a half later, O’Connell has made the most of his opportunities. After winning his first two Challenger titles in 2019, the upstart Aussie has his sights firmly set on the Top 100 and beyond in his US Open debut. He opens against Laslo Djere on Tuesday.

Emil Ruusuvuori (FIN)
We save the two hottest #NextGenATP stars for last. If you aren’t familiar with Ruusuvuori by now, it won’t be long before the flying Finn is a household name. Ruusuvuori turned the ATP Challenger Tour into his personal playground last year, becoming the youngest to win four titles in a season since Hyeon Chung in 2015. The soft-spoken Finn lets his big game do the talking. The rest of the US Open field will be on high alert, as the 21-year-old makes his Grand Slam debut as the newest member of the Top 100. One week after prevailing in his ATP Masters 1000 debut at the Western & Southern Open, the World No. 100 opens against Aljaz Bedene at the US Open.

You May Also Like: #NextGenATP Star Ruusuvuori’s Goal: ‘A Grand Slam Win’

Thiago Seyboth Wild (BRA)
Ruusuvuori and Seyboth Wild are the fresh faces of the #NextGenATP surge. The Brazilian made quite the splash in clinching his maiden ATP Tour title in Santiago, Chile, right before the COVID-19 stoppage. But Seyboth Wold had been plotting his ascent well before that on the ATP Challenger Tour. A maiden title in Guayaquil and semi-final finish in Montevideo capped his 2019 season, providing all the momentum he needed to lift his first ATP Tour trophy. Up to a career-high No. 113 in the FedEx ATP Rankings, the 20-year-old is hoping to pick up where he left off when his US Open campaign begins on Tuesday. He faces 23rd seed Daniel Evans in the first round.

Others To Watch: Mager’s countryman Salvatore Caruso has compiled quite the list of scalps in the past year: wins over David Goffin, Borna Coric and Jannik Sinner, a semi-final finish at the ATP 250 event in Umag and a third-round run at Roland Garros in 2019. Dominik Koepfer is returning to the scene of his big breakthrough, when the German reached the Round of 16 at last year’s US Open. And the feel-good story of the tournament is alive in Attila Balazs. The 31-year-old Hungarian is making his Grand Slam debut after retiring from professional tennis for two years. Ten years after claiming his first Challenger title, he won his second in January in Bangkok. Up to a career-high No. 76, he also reached his first ATP Tour final a year ago in Umag.