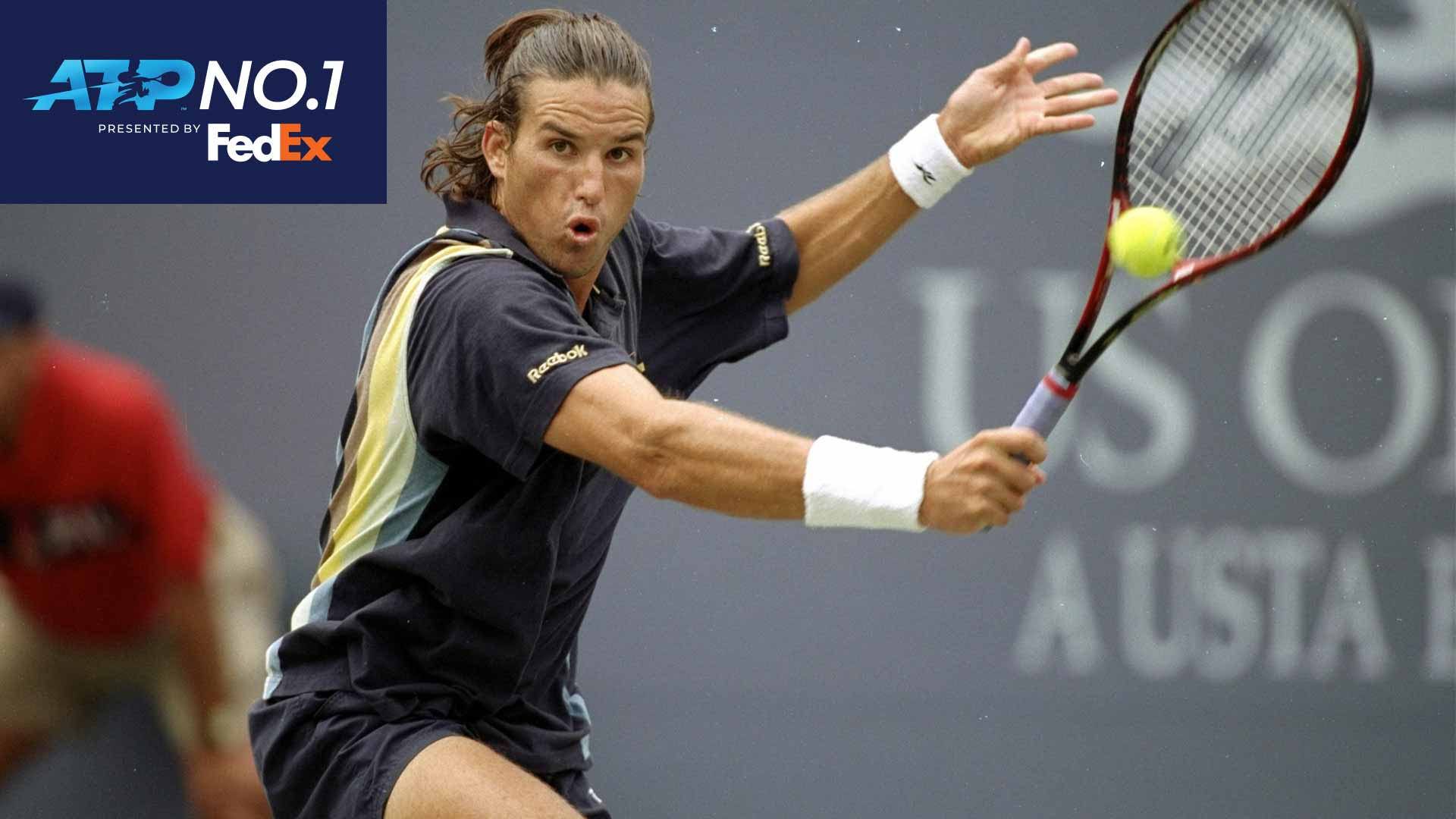 In the latest profile on a series of the 26 players to rise to No. 1 in the FedEx ATP Rankings, ATPTour.com looks back on the career of Patrick Rafter. View Full List

As World No. 1
Rafter holds two unique distinctions of being the only player to reach No. 1 in the FedEx ATP Rankings for a single week and the only man to not play a match while holding that position. He took the top spot from Andre Agassi on 26 July 1999, but lost it the following week after Pete Sampras won a tournament in Los Angeles.

“I always joke with the players,” Rafter said. “They say, ‘Congratulations, mate, you made No. 1.’ I say, ‘Yeah, one week.’ They say, ‘At least you bloody got it. At least you can say you got there.’”

Grand Slam Highlights
Rafter’s pair of Grand Slam titles came at the US Open in 1997 (d. Rusedski) and 1998 (d. Philippoussis). The No. 13 seed navigated a treacherous path to the 1997 final that included Andre Agassi and Michael Chang before becoming the first Australian to triumph in New York since John Newcombe (1973). Rafter’s surprise run prompted John McEnroe to label him a “one-slam wonder”, but his successful title defense the following year silenced critics and established him as one of the best hard-court players of his generation.

The Aussie came painfully close to adding a Wimbledon title to his collection, finishing runner-up in 2000 (l. to Sampras) and 2001 (l. to Ivanisevic). Rafter held a pair of set points for a two-sets lead against Sampras, but blinked and allowed the American to charge back. He admitted that the loss sat with him for the next 12 months. Rafter then came within two points of beating Ivanisevic in the 2001 final, but lost the fifth set 7-9 and found it even harder to move past that match.

“For the first five years after that final, I was waking up in a cold sweat in the night, going through the game when I was up 5-4 on his serve with him at 0/30, wishing I’d done this or that,” Rafter told The Tennis Podcast. “When we shook hands it looked like we were best buddies, but I wasn’t happy. I was hurting. I was seething. I don’t think about it often now. A thought or flashback might come in sometimes and I’m very quick to push it aside.”

Rafter’s initial Grand Slam breakthrough came by powering into the 1997 Roland Garros semi-finals as an unseeded player, but it would be the last time he reached the second week in Paris. Although he historically struggled with home expectations at the Australian Open, he put it all together in his final Melbourne appearance by reaching the semi-finals before falling to Agassi in a five-set classic.

The Aussie did triumph at home by winning the 1999 Australian Open men’s doubles title (w/Bjorkman). Rafter is one of only three men in the Open Era, along with Rod Laver and Stefan Edberg, to reach the semi-finals or better at all four Grand Slams in singles and doubles.

Nitto ATP Finals Highlights
Rafter twice competed at the season-ending championships in 1997 and 2001, but was unable to advance out of round-robin play. His final ATP Tour match came at the 2001 Nitto ATP Finals in Sydney, where he lost to fellow Aussie Lleyton Hewitt. The occasion marked the biggest crowd for a tennis match in Sydney since the 1954 Davis Cup final and enabled Hewitt to clinch the No. 1 ranking for the first time in his career.

ATP Masters 1000 Highlights
Both of Rafter’s ATP Masters 1000 singles title came in 1998  at the Rogers Cup (d. Krajicek) and Western & Southern Open (d. Sampras). Rafter stormed through the draw in Toronto without dropping a set and rallied from a set down to beat Sampras in a nervy Cincinnati final.

Rafter finished runner-up in Cincinnati on two other occasions (1999, l. to Sampras; 2001, l. to Kuerten), in addition to a 2001 finalist showing in Montreal (l. to Pavel). He also excelled on clay by reaching the final of the 1999 Internazionali BNL d’Italia, but with the No. 1 ranking on the line, he fell to Gustavo Kuerten in straight sets.

Rivalries
Rafter and Sampras produced a compelling rivalry throughout the ‘90s and early 2000s that also occasionally sparked off-court drama. Sampras holds a 12-4 record in their ATP Head2Head Series, but their most contentious moments came during the Aussie’s three match winning streak against him.

After Rafter beat Sampras in the 1998 Cincinnati final, ending an eight-match losing streak against his rival, an agitated Sampras responded to a question about the difference between the two players by flatly declaring, “10 Grand Slams.” Rafter used the verbal shot as fuel to beat Sampras weeks later in a five-set semi-final thriller at the US Open before going on to take the title.

Sampras gained revenge by defeating Rafter the following year in the 1999 Cincinnati final. He won the last four matches they contested, including their most high-profile battle in the 2000 Wimbledon final that gave the American his 13th Grand Slam crown, putting him past Roy Emerson as the overall men’s leader in Grand Slam singles titles.

You May Also Like: Andre Agassi: From Rebel To Philosopher

Memorable Moment
Rafter earned the 1998 Arthur Ashe Humanitarian Award in part due to his incredible displays of generosity after winning his US Open titles. He donated $600,000 of his earnings from the two events to the Brisbane Mater Hospital’s Foundation for Terminally Ill Children. In typical fashion, he made the donation quietly and it wasn’t revealed until his mother shared the news in a radio interview.

Legacy
Rafter’s aggressive net charging and silky hands made him one of the best volleyers of his era. Despite his stocky build, he possessed outstanding footwork and was able to still quickly get to the net after hours of play.

He excelled on every surface throughout his career in singles and doubles. Although his biggest successes came on hard courts, his serve-and-volley game seamlessly translated to grass and he also enjoyed plenty of memorable wins on clay. Rafter was always a popular player in the locker room due to his humble and friendly nature, exhibited by his habit of saying, “Sorry, mate” whenever he had to catch his service toss.

A beloved figure in Australia, the 5,500-seat centre court at the Queensland Tennis Centre in Brisbane was renamed Pat Rafter Arena in 2008. He won the Stefan Edberg Sportmanship Award four times (1997, 1999-2001) and was also named Australian of the Year in 2002. Rafter was fittingly inducted into the International Tennis Hall of Fame in 2006.

Agassi On Rafter
“He’s a great player, a great competitor. I’ve had some great matches with him. They’re always ones to remember. Win or lose, you really cherish the opportunity to raise your level at the right time. The fact that he plays the game so differently than I do really lends to a great variety and level of tennis.”

Rafter On Rafter
“Life’s there to make the most of and that’s what I do.”

Broadcaster/Journalist Graeme Agars
“Sorry, mate” was a common refrain when Patrick Rafter was in action. With his net-rushing style of play, his kick serve was an important setup and if he sent up a ball toss he didn’t like, he wasn’t going to hit it. Hence the frequent apologies to his opponent.

Rafter was an intriguing combination of nice guy Aussie and tough competitor who was hard to dislike, but also hard to beat. It wasn’t out of character for him to concede line calls to opponents, while at the same time not conceding an inch in a rally.

His game was all movement and hustle. As a player who sweated an enormous amount, he often looked like he’d been playing for three hours after just three games. He was one of the last of a dying breed of serve-and-volleyers and it wasn’t a surprise that some of his best matches came against fellow net rushers. He beat two of them in claiming back-to-back US Open victories in 1998 and 1999, first accounting for Greg Rusedski and then fellow Aussie Mark Philippoussis.

A troublesome shoulder cut short his career, but not before he had become one of the most popular players on Tour with his easy-going charm and go-for-broke style of play.