For the next fortnight, all eyes will be on the stars of the ATP Tour as they battle for glory at Roland Garros. But as hungry as they will be to lift the Coupe des Mousquetaires, there is a group of competitors that are just as motivated to make a splash at the hard-court Grand Slam. They are the players competing throughout the year on the ATP Challenger Tour.

Securing entry into a Grand Slam is no simple task. It requires year-round focus, hard work and consistency to arrive at this moment. For players grinding on the Challenger circuit, this is the reward. Having the opportunity to test their talents against the best players in the world, and with coveted points and prize money at stake, is what drives these players from January to November.

Roland Garros 2020 is no exception. A platform to showcase their skills and eventually take the next step on the ATP Tour, it presents a huge opportunity on a global stage. A strong performance on the terre battue can prove to be career-altering for many Challenger stars, as they target the Top 100 and beyond. So, which players are poised to wreak havoc on the draw? We look at five to watch in Paris…

Daniel Altmaier (GER)
After more than five months on the sidelines, many players have seized the opportunity to rest, get healthy and fine tune their game. Altmaier is certainly one of them. The 21-year-old, who has battled chronic abdominal and shoulder injuries since reaching his first ATP Tour quarter-final in 2017 (Antalya), used his time in quarantine to work on his fitness and build a “more stable” body structure.

That commitment is paying off for the German, upon the resumption of the ATP Challenger Tour. A year after dropping out of the FedEx ATP Rankings, the 22-year-old Altmaier would rise to a career-high No. 183 just two weeks ago. He reached back-to-back Challenger semi-finals, in Cordenons and Aix-en-Provence, posting statement wins over a surging Lorenzo Musetti and World No. 61 Pablo Cuevas. It was his first victory over a Top 100 opponent in three years.

Among all players in the Roland Garros draw, Altmaier owns the most Challenger wins in 2020. In fact, his 21-11 record is second-best on the circuit since the start of the year. Only Aslan Karatsev owns more victories.

The German will make his Grand Slam debut against Feliciano Lopez, with countryman and 30th-seed Jan-Lennard Struff a potential second round opponent.

You May Also Like: Nadal, Thiem Face Tough Paths At Roland Garros

Tomas Machac (CZE)
What a story this was. Machac wasn’t even slated to be in the qualifying draw on Sunday. But following the withdrawal of multiple players due to COVID-19, the Czech teenager found himself in qualies of a Grand Slam for the first time. From being one of the last players in the draw to punching his ticket to the big show, he would qualify without dropping a set.

Machac might just be the best kept secret on the ATP Challenger Tour in 2020. He’s the teenager few are familiar with, but that won’t last long. In February, right before the COVID-19 shutdown, the 19-year-old won his maiden Challenger crown on the indoor hard courts of Koblenz, Germany. And he’s certainly shown that his game translates to all surfaces, storming through Roland Garros qualifying with authority.

Machac, who is coached by two-time Roland Garros doubles champion Daniel Vacek, likens his game style to Novak Djokovic. Boasting excellent defensive skills on the court, the Czech has developed his talents on the Challenger circuit in the past year. Machac is the youngest player from the Czech Republic in the Top 400 of the FedEx ATP Rankings, rising to a career-high No. 246 upon the Challenger restart in August.

“This is a dream,” said Machac. “I did not expect this. I left everything out there. I’m just excited and I can’t even describe it properly.”

Machac will face the biggest test of his young career in Paris, opening against 27th-seed Taylor Fritz. His Grand Slam debut will be his first meeting with a Top 100 opponent.

Arthur Rinderknech (FRA)
Rinderknech is the Frenchman everyone should be watching in Paris. Prior to the COVID-19 shutdown, no player was more dominant on the ATP Challenger Tour. The Parisian entered the season outside the Top 300 of the FedEx ATP Rankings, but he would find his stride in a hurry. Having thrived in four years at Texas A&M University, the 24-year-old adapted quickly in his second season on the professional scene, claiming his maiden Challenger title at home in Rennes, before sprinting to back-to-back finals on Canadian soil.

Armed with a mammoth serve and boisterous baseline game, Rinderknech built more confidence with every passing week. It was in Canada that he surged to a career-high of No. 160, finishing runner-up in Drummondville and lifting his second trophy the following week in Calgary.

“It was pretty tough for me to stop playing,” said Rinderknech. “If I can digest what happened in January and February, and go back to work with even more motivation, I can achieve my goals. I had a pretty good chemistry on the court and with some more hard work, I know I can do it again.”

A native of Gassin, located along the French Riviera, Rinderknech is poised to make his Grand Slam debut on home soil. He will face Aljaz Bedene in the first round and could face the winner of the all-Serbian clash between Filip Krajinovic and Nikola Milojevic.

Jurij Rodionov (AUT)
Rodionov is the #NextGenATP star on the rise in Paris. Prior to the COVID-19 shutdown, the Austrian was sprinting towards qualification into the Next Gen ATP Finals. He was a ruthless force in the month of February, scoring an impressive 15 wins from 17 matches on the ATP Challenger Tour and lifting trophies on both the indoor hard courts of Dallas and outdoor hard courts of Morelos.

After nearly three years grinding on the Challenger circuit, Rodionov’s breakthrough finally arrived. Rodionov has flipped the script in 2020, teaming with new coach Javier Frana to climb to a career-high of No. 166 in the FedEx ATP Rankings.

Rodionov boasts a unique and eclectic game style, often employing various tactics from point to point.  From moving his opponents side-to-side and then luring them in to the net, to staying on the baseline and looking to attack with his forehand, the Austrian is as unpredictable as they come. And with his affinity for the tweener, trick shots are not out of the question.

Aleksandar Vukic (AUS)
There are no easy matches in Grand Slam qualifying and Vukic had to earn all three of his victories at Roland Garros. In the first round, the Aussie saved two match points to upset the surging Spanish teen Carlos Alcaraz. Trailing by a set and a break, he would claw back from the brink of defeat. Vukic would not be denied his first Grand Slam appearance from there, overcoming Prajnesh Gunneswaran and Jason Jung to punch his ticket to the main draw.

A three-time All-American at the University of Illinois, ‘Vuki’ hails from Sydney, Australia, but has Eastern European heritage in his blood. His parents, who introduced him to the game at age five, are from Montenegro (dad) and Bosnia (mom).

The 24-year-old graduated with a degree in finance in 2018 and has battled on the ATP Challenger Tour ever since. In March, all the work finally paid off. In the week before the COVID-19 shutdown, Vukic reached his first Challenger final on the hard courts of Monterrey, Mexico (l. to Mannarino). He secured the biggest win of his young career in upsetting World No. 56 Feliciano Lopez in the second round.

Now, up to a career-high No. 190 in the FedEx ATP Rankings, the Aussie is hoping his strong 2020 campaign translates to the Grand Slam stage. He faces another qualifier, Pedro Martinez, in the first round, with 14th seed Fabio Fognini and top American John Isner also in his immediate section of the draw. 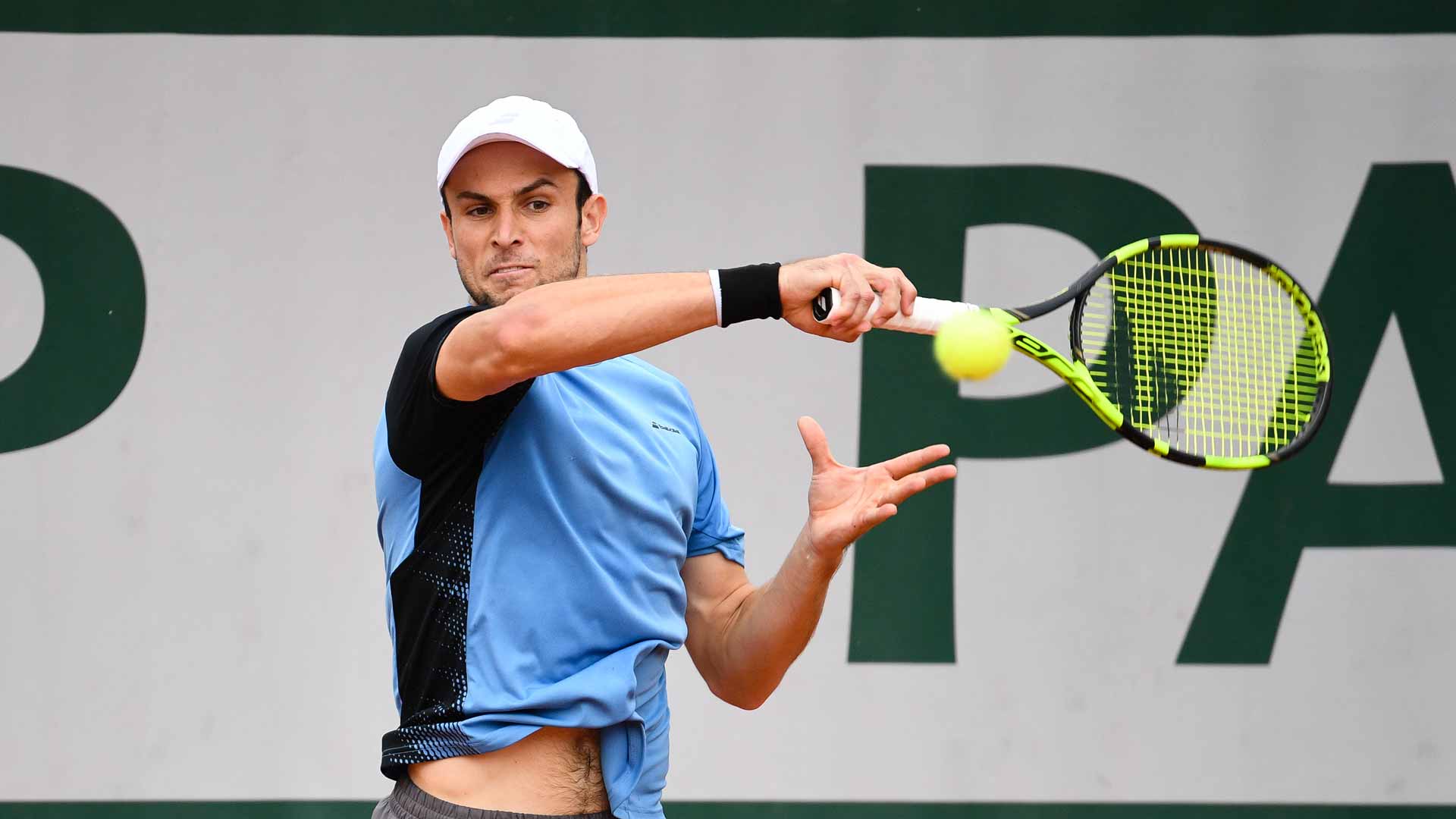 Five More To Watch
Liam Broady qualified for a Grand Slam for the first time, as the 26-year-old refused to drop a set in his three matches. Having previously received Wimbledon wild cards on three occasions, it marks his first successful major qualifying campaign in 12 attempts. He will open against Jiri Vesely.

Steven Diez was made to wait even longer in his bid to qualify at a slam. In his 16th attempt, the Canadian earned his Grand Slam debut on Thursday. The World No. 179, who won his lone Challenger title in Burnie, Australia, last year, has Spanish parents and originally competed for Spain early in his career.

Two sons of Grand Slam champions – Emilio Gomez and Sebastian Korda – also booked their spots in the main draw from qualifying. Exactly 30 years after his father Andres Gomez won Roland Garros, Emilio rallied from 0-3 30/40 down in the deciding set (d. Popko) to punch his ticket on Thursday. And 20-year-old Korda, son of 1998 Australian Open champion Petr Korda, will also make his debut in Paris.

One of the more under-the-radar first round match-ups features Vukic against Pedro Martinez. At No. 105 in the FedEx ATP Rankings, the Spaniard is on the precipice of a Top 100 breakthrough. Martinez is ready for the big stage, having reached the Australian Open second round as a qualifier in January, as well as his first ATP Tour quarter-final in Rio de Janeiro. And just two weeks ago, he earned his first Top 50 win (d. Querrey) in his ATP Masters 1000 debut in Rome.