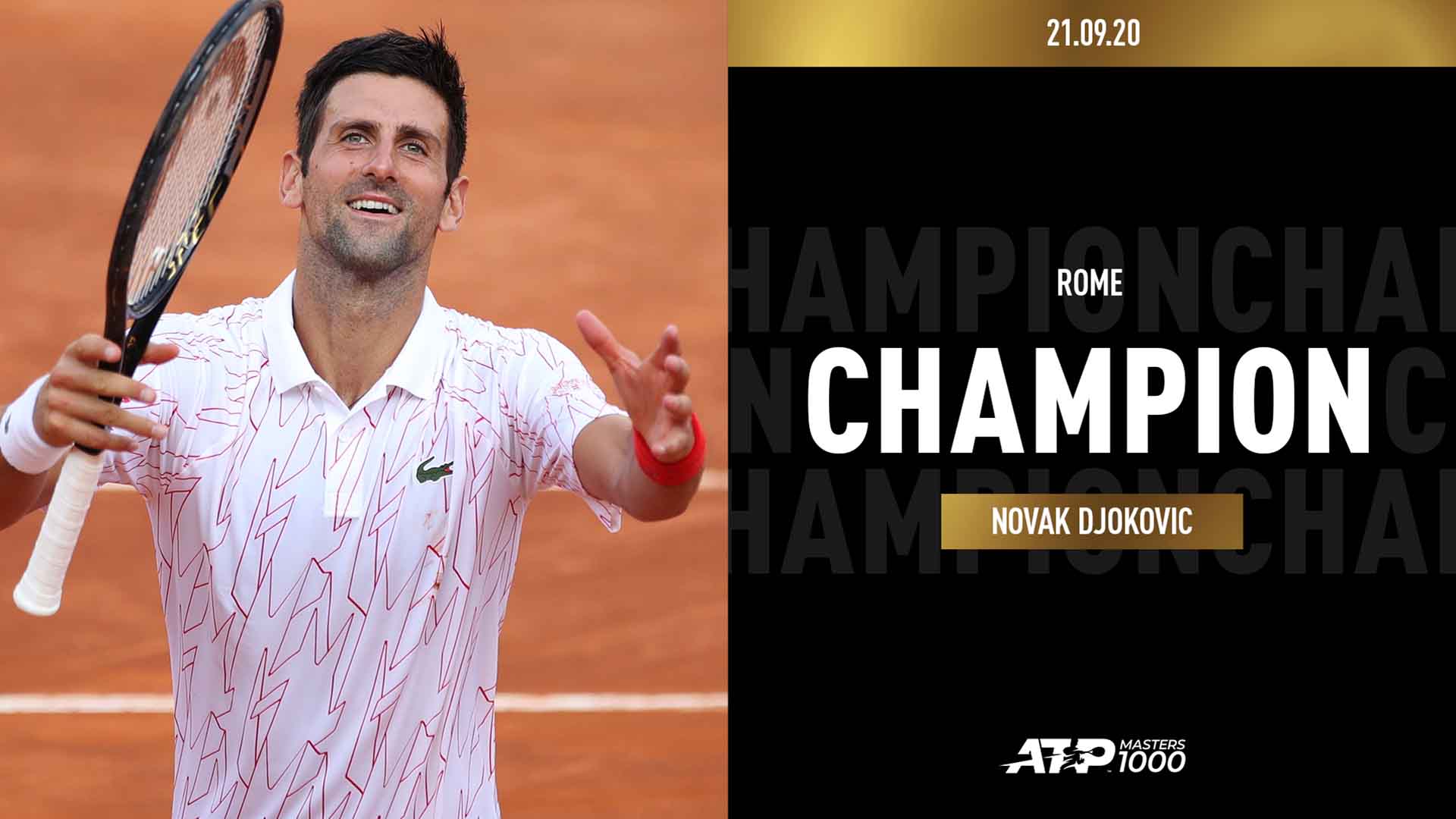 The World No. 1 rallied from a double break down in the first set to defeat Diego Schwartzman 7-5, 6-3 and claim a record-breaking 36th Masters 1000 crown. Djokovic entered the event level with 35-time Masters 1000 titlist Rafael Nadal, but has now moved ahead of the Spaniard with his fifth Rome trophy.

Djokovic has now won 31 of his 32 matches this year. The 33-year-old has won four trophies from five events in 2020, following title runs at the Australian Open (d. Thiem), the Dubai Duty Free Tennis Championships (d. Tsitsipas) and the Western & Southern Open (d. Raonic).

“It was a great week. A very challenging week. I don’t think I played my best tennis throughout the entire week, but I think I found my best tennis when I needed it the most in the decisive moments today, yesterday [and in] practically every match,” said Djokovic.

“That definitely makes me very satisfied and proud that I managed to find that fifth gear when it was most needed. Turning to Paris, I couldn’t ask for a better tournament here in Rome. Another big title and [I am] super pleased with it.”

This is the first of two milestone moments for Djokovic today. When the new FedEx ATP Rankings are run later this evening, the Serbian will begin his 287th week at the top of the FedEx ATP Rankings to pass his idol Pete Sampras’ total of 286 weeks.

Most Weeks As World No. 1 In The FedEx ATP Rankings (when latest standings are run)

Djokovic has also moved ahead of Nadal to become the oldest champion in tournament history. The 33-year-old improves to 5-5 in Rome championship matches, one year after falling to a 32-year-old Nadal in last year’s championship match.

This is the second straight year that Djokovic has defeated Schwartzman at the Foro Italico. The 17-time Grand Slam champion overcame the Argentine in three sets to advance to last year’s championship match. Djokovic is unbeaten in five ATP Head2Head matches against Schwartzman.

“[Diego] played well in heavy conditions, especially at the beginning… He played many long matches. He had fantastic wins against Nadal and Shapovalov last night, so credit to him for a phenomenal tournament and I wish him all the best in the rest of the season,” said Djokovic.

Schwartzman would have cracked the Top 10 in the FedEx ATP Rankings for the first time if he had captured the Rome trophy. As a result of Djokovic’s win, Rome semi-finalist Shapovalov will make his debut in the Top 10.

Schwartzman made a fast start on Centrale, charging around the court and playing with great variety to outmanoeuvre his opponent and establish a double-break advantage. After hitting a number of unforced errors in the opening three games, Djokovic responded quickly. The World No. 1 began to dictate rallies with his forehand and recovered both breaks to level the score at 3-3.

Djokovic was unable to convert a set point at 5-4, when Schwartzman stepped inside the court to strike a forehand winner. But the Serbian was handed three further opportunities at 6-5 as Schwartzman committed a series of errors. Djokovic took the third of those chances, dragging the Argentine across the baseline with a series of heavy forehands to extract another error.

After trading breaks to open the second set, Djokovic made the crucial move at 3-3. The 81-time ATP Tour titlist held serve to love and struck two inspired winners: a forehand lob and a backhand winner down the line to earn a love service break in the following game. Djokovic earned three consecutive championship points at 5-3 and took his third opportunity with a backhand drop shot.

Did You Know?
Schwartzman was attempting to join 2016 champion Andy Murray and 2017 winner Alexander Zverev as only the third player outside of Djokovic and Nadal to lift the Rome title since 2005. Djokovic and Nadal have combined to win 14 of the past 16 editions of this event.